On March 29, 2019, Section members and guests enjoyed a most interesting presentation by guest speaker Chris Gear, the vice-president of team operations and general counsel for Canucks Sports and Entertainment, which owns the Vancouver Canucks Hockey Club and Vancouver Warriors Lacrosse Club.

Chris reminded the audience of the fact that sport has become big business, and referring to the applicable laws as “sports law” is something of a misnomer; more accurately it involves the application of business law discipline to the sport context. Sport franchises are valued in the billions of dollars, and players are paid millions, sometimes hundreds of millions. Sport activities and the collateral aspects of those activities are often focal points in building cities and communities. Their activities are complex businesses that operate within the existing social and legal orders.

Sport, like all of society, continually evolves, as does its footprint. Chris gave the example of the rise of e-sport, which like it or not is now a factor. His company has already invested in the sector, particularly the competitive gaming aspects. In respect of the phenomenon, like any responsible business investment in something new, he sought “expert” advice. Although he could understand why individuals might have an interest in playing e-sports, why would people would pay to watch (often in specially constructed facilities) other people play e-sports, from which the players earn considerable income? The 12-year old expert’s perspective on this was simply, “Dad, you watch other people playing hockey for a living.” There will be much more of this to come.

The seminal events that brought Chris to sports occurred in 1984, when the Edmonton Oilers won the first of five Stanley Cup championships, led by the Great One, Wayne Gretzky, and when Los Angeles hosted the Olympic Games. This led to business school, followed by law school and subsequent professional experience in M&A, corporate finance, and related fields. His insertion in the sports field came from volunteer involvement in an annual PGA golf tournament sponsored by Air Canada, which helped him to understand the needs of sponsors and broadcasters. When Vancouver decided to bid for the 2010 Winter Olympic and Paralympic Games, Chris volunteered to work on the bid as an investment in the community at large.

After Vancouver won the bid, the chief legal officer of the organizing committee offered him a job on the legal team for the ensuing five to six years. It was a whirlwind experience, with long, difficult, but inspiring, work and some 5,000 contracts, for which there were precious few useful precedents (given that the preceding Olympic Games were held nin China, Italy, and Greece). They encountered the usual range of problems, from a lack of snow, interference with the torch relay, and initial bad weather that, fortunately, cleared up by the fourth day of the games. 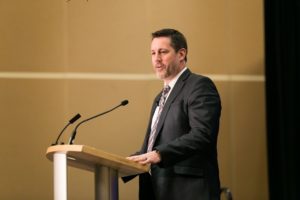 During his time with the Canucks, there have been several legal issues to face, which have included legal proceedings arising from the career-ending injury of an NHL hockey player that took forever to resolve, including jurisdictional issues (whether the case should be resolved in civil court or within the NHL structure, and whether the injury was a personal or club responsibility) and a quantum of applicable damages. Other legal proceedings arose in the context of a trademark of the Vancouver Millionaires, a hockey club that had won the Stanley Cup in 1915, before the NHL was formed. The trademark had been acquired by a squatter, who sold t-shirts with a registered mark. The owner, a hard-rock performer named Thor (but off-stage a reasonable, mild-mannered Clark Kent), agreed to sell it, and the Vancouver team wore the jerseys in an NHL game commemorating the 1915 Stanley Cup winners.

The matter of trademarks is one of the most valuable assets for any professional team, which must be able to protect the rights it has granted to marketing partners and sponsors. A local Honda dealership jumped on the Canucks playoff bandwagon and portrayed itself as (in effect) a Canucks partner, painting the dealership in Canucks colours and generally occupying a great deal of Canucks “space.” This, of course, was not appreciated by the official Canucks sponsor in the automotive category, General Motors. The team sent a cease-and-desist letter to the dealership, which then took it to a local radio station and had it read over the air, painting the Canucks in a bad light. The learning experience for the team was that it had not explained in advance to the public how important it was to the Canucks that the rights granted be respected by the community at large.

An emerging set of rights relates to players. To what extent does a player retain the rights to her or his image, and to what extent does the club or organization own those rights? One solution to the dilemma was to create a group licence, under which the clubs could use four or more players in a club promotion, whereas in promotions involving three players or less, the individual players retained their personal rights, and their consent would be required. A local professional hockey team had a promotion for Canucks Water, using the portraits of four players on water bottles, under the group licence agreement. The agent for one of the four complained that the players union had no right to use his client’s image. The club immediately removed his image and found another player, who then trumpeted around town that they had had to change the complaining player’s bottles because those bottles tasted like piss. What comes around, goes around!

In his current role with the Canucks Management Team, Chris deals on a daily basis with risk management, governance, venue, and other agreements; player compensation; dealerships; sponsorships; the evolving e-sports; and concessions. He considers that sports are good for society and the local community. As he says, “We are all Canucks.”

During the Q & A following his initial remarks, Chris was asked what innovations were being adopted to make the game of hockey more interesting for spectators. Chief among these were the use of chips in the pucks and players’ uniforms to enable better tracking of the movements of both the players and the puck and better replays to demonstrate how plays developed, all as supplementary information for the fan base. There is also the possible use of biometric data and statistics (such as heartbeat, speeds, etc.) if such data is not used improperly, such as a club refusing to pay a large (or long-term) salary to a player who was shown by the biometric data to have an irregular heartbeat.

Richard Pound is a counsel in the Tax Group of Stikeman Elliott. His main areas of…

The Olympic Games: an event that involves athletes from 206 countries competing in 33 different sports,…