At the ABA’s Business Law Section (BLS) meeting in Washington, DC, last month, Penny Christophorou, immediate past president of BLS, honored Donald R. Kirk, shareholder with Carlton Fields, with the Section Chair’s Award. This award is given to members who have made outstanding contributions to the Section and to the legal profession.

According to Christophorou, the selection of Kirk for this award was based on two areas of distinction: his committee work on the Business Bankruptcy Committee and his chairmanship of the BLS Publications Board. 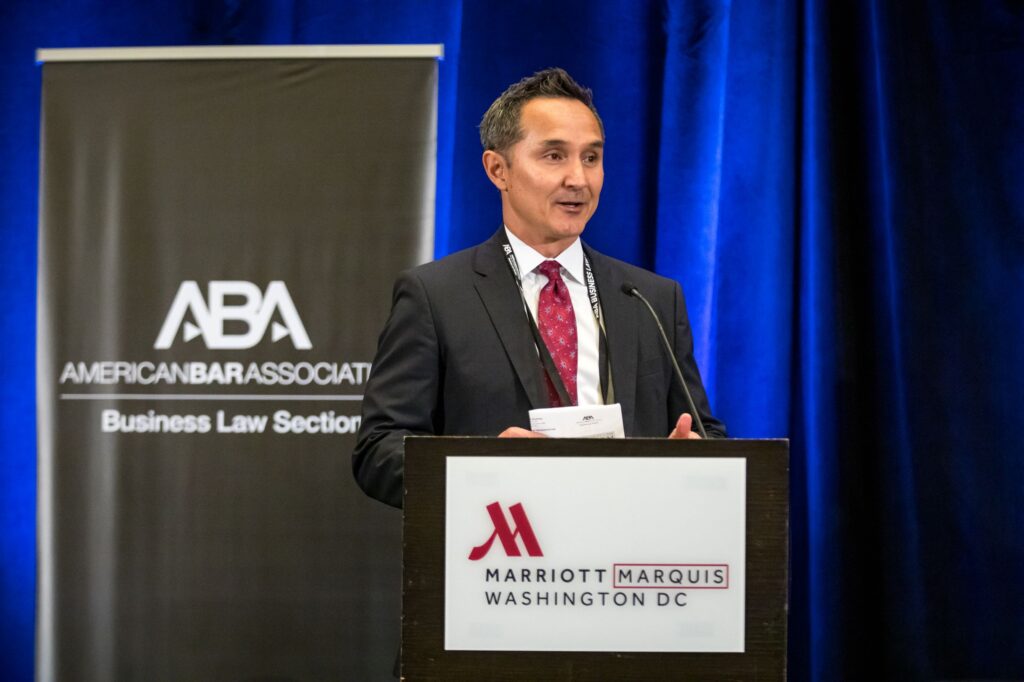 Kirk, who is based in Tampa, has demonstrated time and again his commitment to the Section and has mentored many BLS members in their legal careers.

“Donald is that rare leader who sets a goal, conceives a plan, motivates his team, and then stays out of their way as they all do their part to achieve that goal,” said Norm Powell, BLS Secretary. “Working with him is a pleasure.”

Juliet Moringiello, associate dean for Academic Affairs and professor of law at Widener University Commonwealth Law School, who has worked side by side with Kirk on the Publications Board, had this observation: “Publications Board meetings chaired by Don Kirk were always a delight. His knowledge of the Section, preparation for the meetings, and commitment to the role motivated all of us as board members to continue to build the Business Law Section book brand.”

L. Collin Cooper, who is now chair of the Publications Board, valued Kirk’s skills and characterized him as the “consummate leader.”

“I have certainly learned some valuable lessons that I intend to carry forward,” said Cooper. “Donald’s style of leadership is effective, as he always seeks to ensure that all thoughts and ideas are heard, while also safeguarding the quality of the Section’s thought leadership. The Business Law Section—and, indeed, the ABA is very lucky to have driven members like Donald who inspire others and act with a sense of urgency, while expertly guiding others to achieve quality results.”

At the Virtual Section Annual Meeting in September 2021, Jeannie Frey, chair of the Business Law Section,…

Claypoole Positions BLT as a Leader in Business Content

Ward Classen is a member of the legal department of Discovery Education, Inc. He has over 35 years’…

Robert B. Dickie is the founder of The Dickie Group, which provides training in finance and accounting…

One of the ABA Business Law Section’s most prized publications is A Manual of Style for Contract Drafting,…