Plenty has changed since January 2022, when we last examined developing trends in the SPAC market. Since then, the macroeconomic environment shifted dramatically due to rising inflation, increasing interest rates, and the war in Ukraine; the PIPE market collapsed; traditional IPOs dried up; and the SEC came out with a set of controversial proposed SPAC rules.

Still, this is not the time to throw your arms up in frustration and jump off the SPAC ship; it’s a time to learn, examine, correct, and improve.

With these goals in mind, we’ve identified a few interesting trends that may inform current and future plans for our SPAC clients and friends.

1. The number of securities class actions is holding steady.

When it comes to SPACs, Securities Class Actions (SCAs) are the elephants of lawsuits. These suits are the heavy hitters in terms of time spent and defense costs incurred. They are what companies most look to avoid and what ultimately drive their decisions on Directors and Officers (D&O) insurance. We track them closely because they inform the terms and pricing in the D&O insurance market and the structuring of the D&O policies we offer to our clients.

Despite a larger number of deals in the market, and taking into consideration the lag between the merger and the filing of the lawsuit, the number of these suits is holding steady as compared to 2021. If the current trend continues, the number of SCAs should be about the same this year as what we observed in 2021. 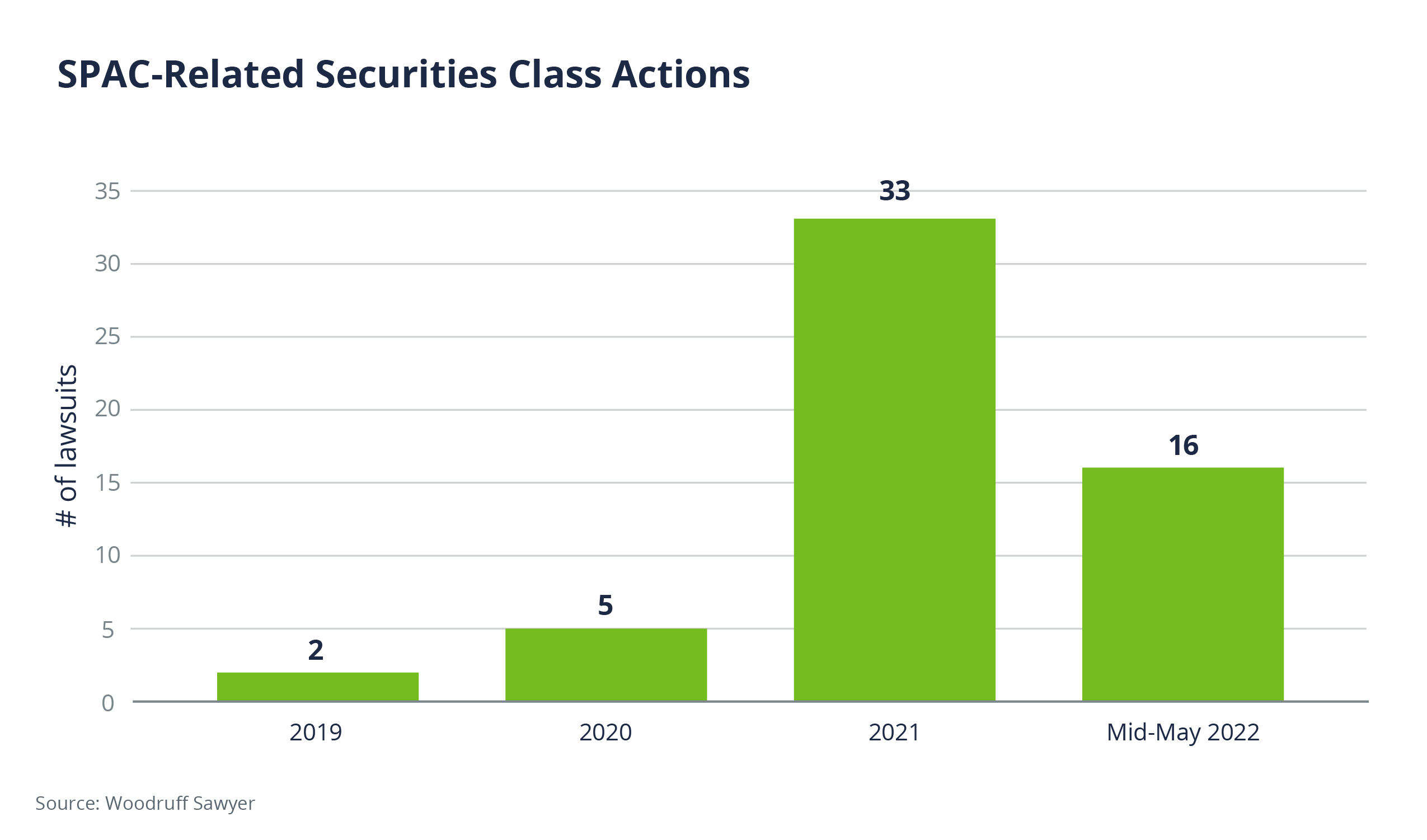 2. The likelihood of a SPAC getting hit with an SCA post-merger is also holding steady. 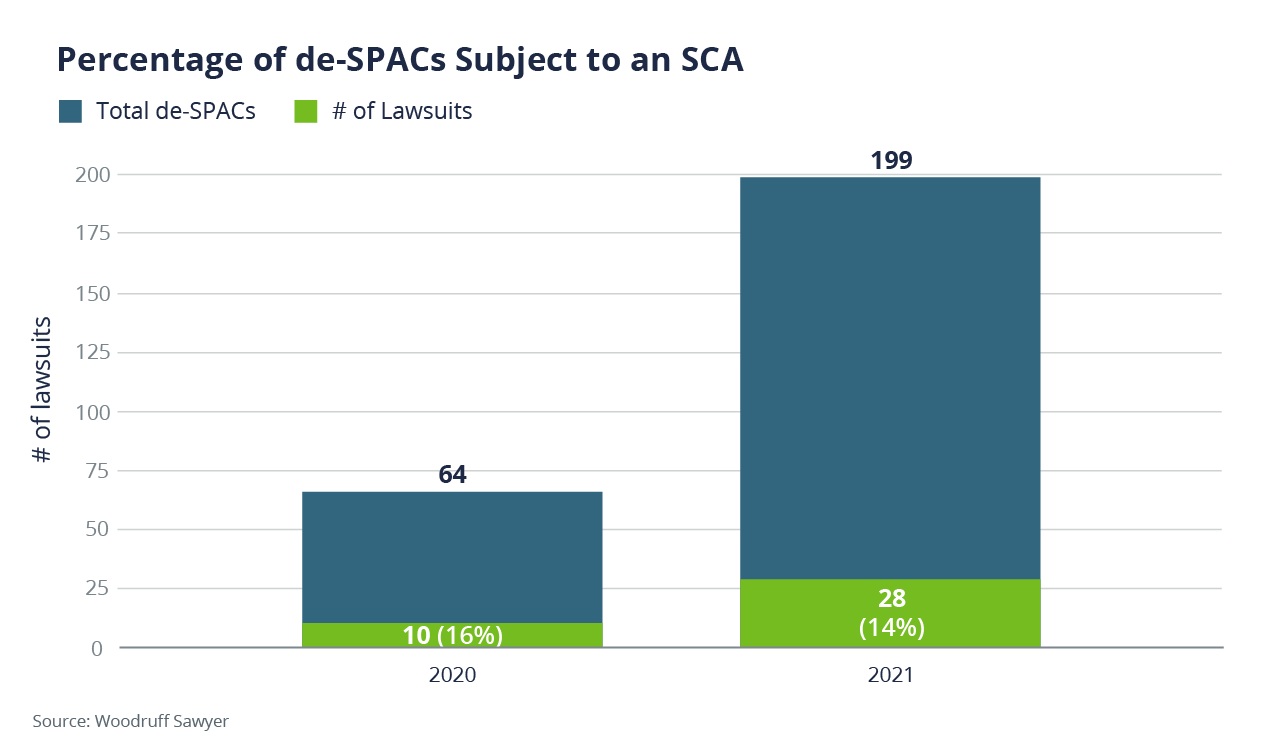 Interestingly, if we look at companies that went public via a traditional IPO, about 3% of those that IPOed in 2020 and 5% of those that IPOed in 2021 were sued within the first year of the IPO. That percentage is significantly lower than the rate at which de-SPACed companies are being sued. This means that it is considerably more likely that a de-SPACed company will be caught up in an SCA in its first year out of the gate than a traditional IPO company.

Why? Increased negative media and regulatory attention on SPACs might have something to do with it. Rushed deals at the height of the SPAC craze in 2020 and 2021 could have contributed to a few colorful SPAC missteps. A new, lucrative avenue of activity for the plaintiffs’ bar could also be a reason.

SPACs have also been targets of many short sellers’ reports. Many of these reports spurred an SCA shortly after their publication. In 2021, thirteen of the thirty-three SCAs filed that year (40%) stemmed from a short-seller report. By mid-May of this year, five out of sixteen suits (31%) have been based on short-seller activity. 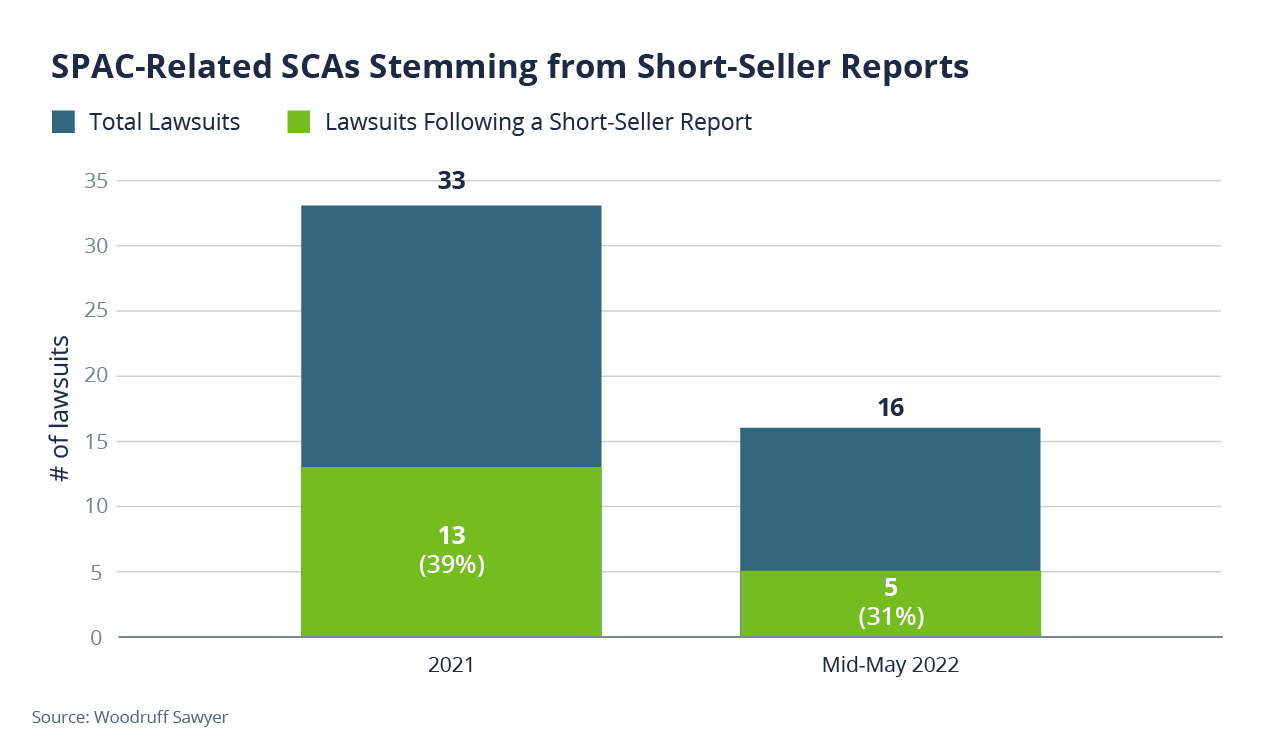 It is worth noting that while these suits have been filed against SPAC entities in larger numbers than in previous years—whether prompted by a short-seller report or not—few of them have gone far enough through the legal process to determine whether they have merit.

3. The SPAC’s team is named in two-thirds of SPAC lawsuits.

Although there have been instances of SCAs brought against SPACs prior to the merger, most are filed after the merger. Many of our clients ask whether the SPAC’s original team of directors and officers is home free (meaning out of danger of a lawsuit) once the merger is closed. The response to that question is usually not.

In fact, about two-thirds of the SCAs filed in 2021 and 2022 named directors and officers of the SPAC entity as defendants in the lawsuit. Here is where the tail (aka run-off) on the SPAC’s D&O insurance policy comes into play.

As many of our readers know, the insurance policy that covers the SPAC is claims-made in nature. That distinction means that if the policy is not in place when the lawsuit is filed and the claim is made, it won’t respond. Since many of the lawsuits are filed after the merger, terminating the SPAC’s policy at the time of the merger without electing tail coverage leaves the SPAC’s directors and officers exposed.

How often are they exposed? Two-thirds of the time. Here are the numbers. 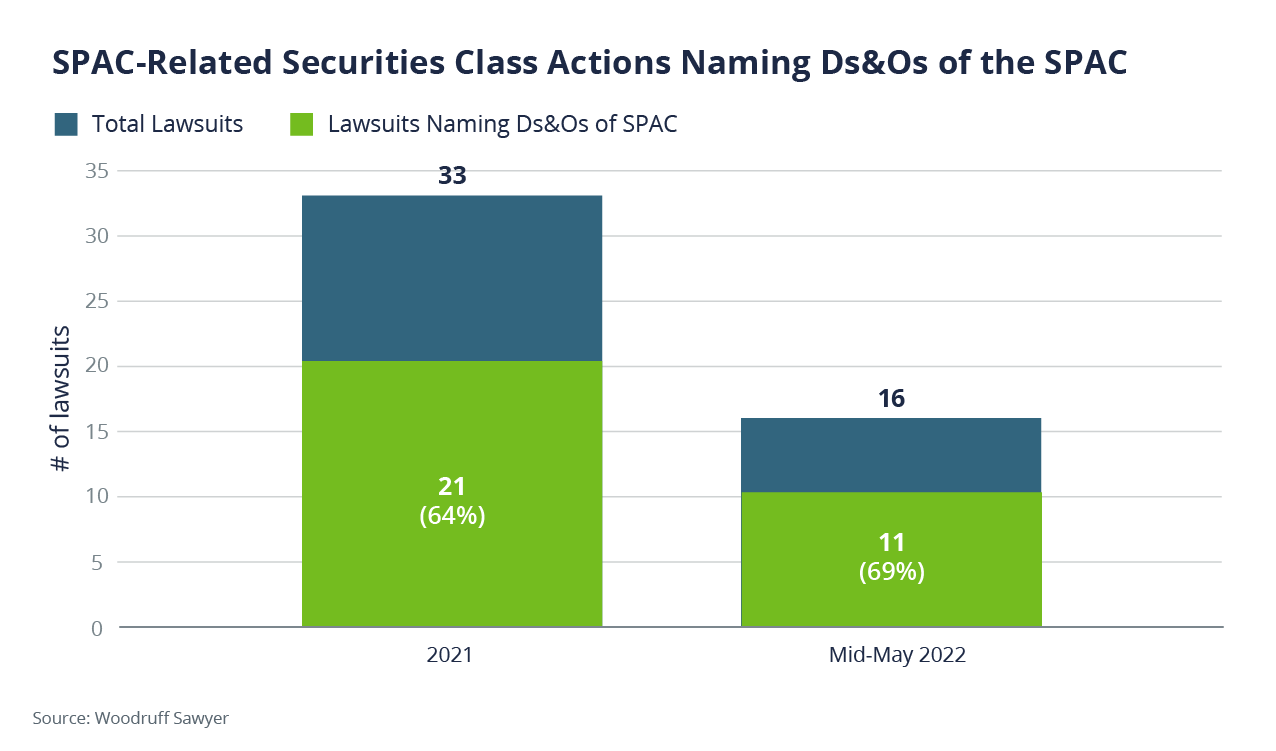 4. RWI for a SPAC could lead to post-merger D&O enhancements/savings.

More and more SPACs are looking to address claims of insufficient or shoddy diligence through the representations and warranties insurance (RWI) policy placement process.

At its core, the RWI policy is designed to protect the buyer (in this case, the SPAC) against two things: (i) the seller’s (in this case, the target’s) breaches of reps in the merger agreement and (ii) the target’s fraud. However, a valuable side benefit of these policies, especially now that the number of SPAC cases alleging insufficient diligence is growing, is the insurer’s close examination of the SPAC team’s due diligence.

Second, it is conducted by an experienced underwriting team and their top-tier legal counsel, who are usually well versed in the industry of the target and very knowledgeable about the array of potential risks present in that industry.

Many SPAC teams have explored and obtained RWI policies in the last two years. Some of the deals that come to mind include the acquisitions of Utz, Opendoor, and Paysafe. And recently, D&O insurers have started taking note of teams and deals that are willing to go through the process of obtaining an RWI policy.

Like any additional vetting, diligence, or compliance process, the steps involved and the willingness of the team to go through them signal the maturity, veracity, and sophistication of the SPAC team and its acquisition target. All those factors reduce litigation risk and add to the comfort level of the insurer that is looking to insure the post-merger entity.

In fact, very recently, at least one of the leading SPAC D&O insurers, realizing the benefits of an RWI policy for a SPAC, has started to offer price reduction options on D&O premiums for SPACs that choose to obtain an RWI policy ahead of their merger. Additional D&O insurance breaks and better terms for the post-merger combined company may also become available.

Like the ever-evolving SPAC market, the insurance market for SPACs is also evolving and adapting. We are expecting to see additional new, creative solutions to SPAC risks before the year is out.

SPAC Litigation by the Numbers: Surprisingly Positive Trends in 2022

Tumultuous, exasperating, difficult, nerve-wracking, and frustrating are all apt descriptions of the…

Two Hot Button SPAC Issues as We Wrap Up 2022

Over the past year, SPACs have been through market shifts, regulatory thrashing, economic issues, novel…