Over the past year, SPACs have been through market shifts, regulatory thrashing, economic issues, novel litigation theories, and SEC enforcement actions. I touched on all of these in my previous post for the SPAC Notebook, but for this month’s edition, I turn to some of the most commonly asked but not necessarily answered questions that are top of mind for many SPAC teams right now.

These two questions keep popping up in my inbox:

How to Handle the 1% Excise Tax

The Inflation Reduction Act, which was signed into law on August 16, 2022, establishes a new 1% excise tax on certain stock buybacks by domestic public companies. Many experts, including most attorneys I’ve spoken to, believe the provisions of this new law could be broad enough to possibly pull SPAC redemptions into their sphere.

As a result of the new excise tax, most SPAC teams that do not currently have a deal in the works are rushing to liquidate before January 1, when the tax becomes effective. According to SPAC Research, as of December 2, 64 SPACs have liquidated this year, with the frequency of liquidations increasing significantly in the last two quarters. There were 18 liquidations in October. 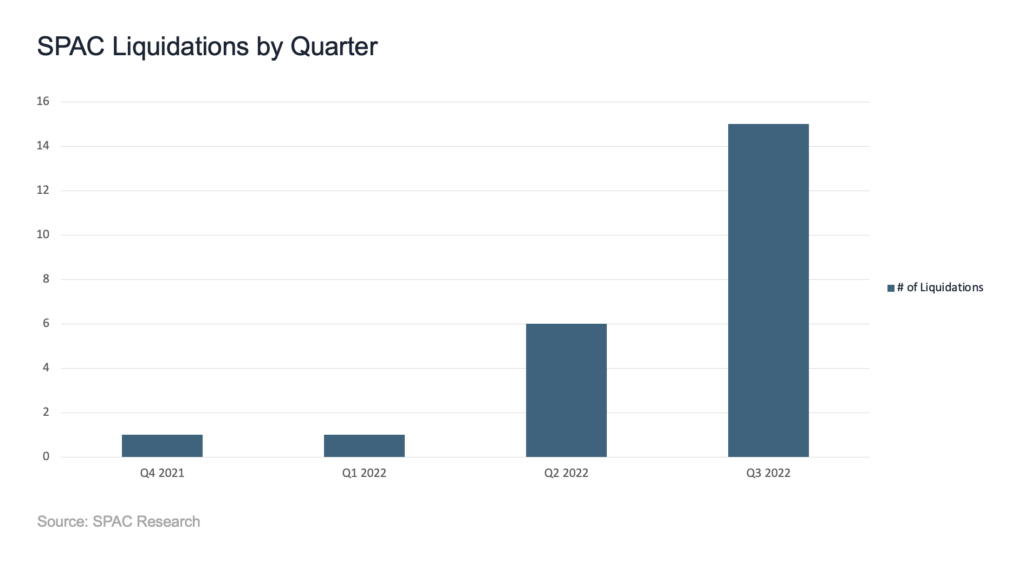 Although we have not seen many post-liquidation lawsuits so far, some litigators expect that the increased number of liquidations will prompt the plaintiff’s bar to test some of those liquidation decisions and proceedings in court. Therefore, a careful look at whether an extension of D&O insurance coverage (also known as a tail) for the SPAC’s directors and officers post-liquidation is warranted.

Other SPAC teams that believe they will get a deal done before their deadline or have one on the table but are waiting to close in early 2023 may be willing to risk becoming subject to the excise tax. These teams usually are looking to extend their investment period for another three to six months.

But, of course, with such an extension landing the SPAC and any of its redemptions square into 2023, the question is who will pay for the excise tax? Will it be the SPAC sponsor or the shareholders? Will this tax come out of the trust funds, or will the sponsors need to come up with additional sponsor capital to cover what could end up being a multimillion-dollar tax bill?

Some SPACs, like the Data Knights Acquisition team, realizing that this could become a sticking point for shareholders who need to approve their extension, are coming out with promises that they will not touch the trust but will cover the tax out of sponsor capital. Other SPAC teams will likely follow this strategy as well.

Option 3: Extend but Leave the Tax Bill to Shareholders

Other SPAC teams may have a different view. Depending on how the SPAC’s documentation is written, some SPACs may take the position that the excise tax, like franchise and other taxes, will need to come out of the trust funds. This will, of course, endanger the $10-per-share shareholder investment, especially if these same SPACs decide to keep their trust funds in cash to avoid tripping the SEC’s Investment Company Act safe harbor. Will the shareholders of these SPACs go along with this idea, or will they object via a lawsuit? We have yet to find out.

Necessity is the mother of invention, and that proverb is proving to be true in SPAC land. Aside from the creative ways SPAC teams are enticing their shareholders to approve extensions, many teams are looking for alternative avenues for getting a deal done.

Having realized that they may not have what it takes to land or close a deal but not wishing to liquidate, some SPAC teams now are considering two options: a team swap or a public company merger.

In a team swap, the old team enters a sharing or hand-over arrangement with a new team, in which they share some of the economics of the deal, but essentially the new team takes the reins on finding a suitable target and/or closing the transaction. The new team invariably brings deal know-how and connections to the table. As for the old team, walking away with a fraction of interest in a potential deal versus 100% of interest in no deal is often a better alternative.

As you can imagine, these swaps are difficult to accomplish. They are also challenging when it comes to insurance coverage. The old team wants to be covered in case they’re pulled into a lawsuit or an enforcement action after the swap. And the new team, of course, wants to be protected as well.

For insurance underwriters who based their terms and premium pricing on the track record of the old team, a new team with a different track record may not be palatable. If the underwriter is not willing to extend the original policy to the new team, the new team may need to go looking for new coverage, which may be unavailable or a lot more expensive than what the old team was able to obtain 18+ months ago.

The costs of this coverage will need to be folded into the swapping arrangement the two teams ultimately agree on. Having this conversation with your SPAC insurance broker before entering into any agreements is key.

Complicating the situation is coverage for the outgoing team after the swap. If the new team obtains a new policy, it is unlikely to cover the old team’s directors and officers, and the old policy is unlikely to continue after the swap. The outgoing team then will need to consider whether it needs to buy tail coverage for its original policy, another cost that it may not have anticipated. The new team may be willing to cover this cost, but again, this discussion needs to happen before completing the swap. That way, the insurance broker will be able to advise the two teams on the best course of action.

On the theory that some public companies may be more willing and able than private companies to enter into a merger with a SPAC, some SPAC teams are considering a merger with an already existing public company. An example of such a transaction is the October 31, 2022, closed merger of Coeptis Therapeutics Inc. with the SPAC Bull Horn Holdings Corp. The SPAC sponsor reportedly liked the idea because of greater transparency stemming from the publicly available performance record of the target.

For the public company, a merger with a SPAC provides a cash infusion from the SPAC’s trust account and access to the SPAC team’s expertise. For the SPAC, aside from the undeniable benefit of getting the deal done, the risk is presumably reduced for several reasons. First, there are fewer issues with public company readiness, a problem that has plagued many newly de-SPACed companies. And second, there is the greater transparency of an already publicly filed business. I’ll leave it to the bankers to opine on whether the economics of these kinds of deals will benefit the investors in the SPAC and the target company.

From the insurance perspective, interesting questions come up as far as coverage of the original SPAC and its team prior to the merger. As with other unusual SPAC-related situations, the insurance coverage and costs need to be looked into thoroughly ahead of making any major budgeting decisions.

Mergers with already public companies arguably miss the point of the SPAC vehicle, which was designed as an alternative to a traditional IPO. However, in the current hostile market, I would not be surprised to see other similar transactions in the near future.

It is heartening to see the recent uptick in deal activity in the SPAC world. According to November’s Nasdaq SPAC Monitor, although SPAC IPO activity is understandably down this year, October was the hottest month for SPAC merger announcements since December 2021.

Despite the recent wave of liquidations that make it feel like every SPAC is liquidating right now, SPAC Insider reports that only 12.9% of the 2020 SPAC class and 2% of the 2021 SPAC class have liquidated so far. This is a much smaller ratio than for the 2010 through 2016 SPAC vintages. We’ve also seen 26 announced mergers in October 2022. Although the enterprise values of those deals are unsurprisingly down versus last year (average $800 million in 2022 versus $2.3 billion in 2021), the increased pace of deals is a welcome change. Perhaps we’ll see even more deals with novel structures and approaches as the SPAC market continues to evolve and adapt.

SPAC Litigation by the Numbers: Surprisingly Positive Trends in 2022

Tumultuous, exasperating, difficult, nerve-wracking, and frustrating are all apt descriptions of the…

Plenty has changed since January 2022, when we last examined developing trends in the SPAC market. Since…