Tumultuous, exasperating, difficult, nerve-wracking, and frustrating are all apt descriptions of the 2022 SPAC market. We’ve summarized some of its ups and downs in our year in review blog post from October and have touched on them again in our December podcast with Doug Ellenoff.

In this article, we’ll examine the hard data, which, in some cases, is yielding surprising and—dare we say it—positive trends and conclusions.

SPAC Lawsuits by the Numbers 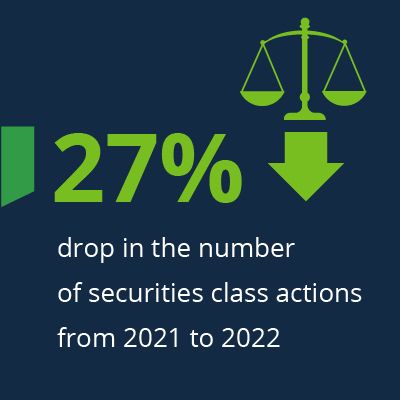 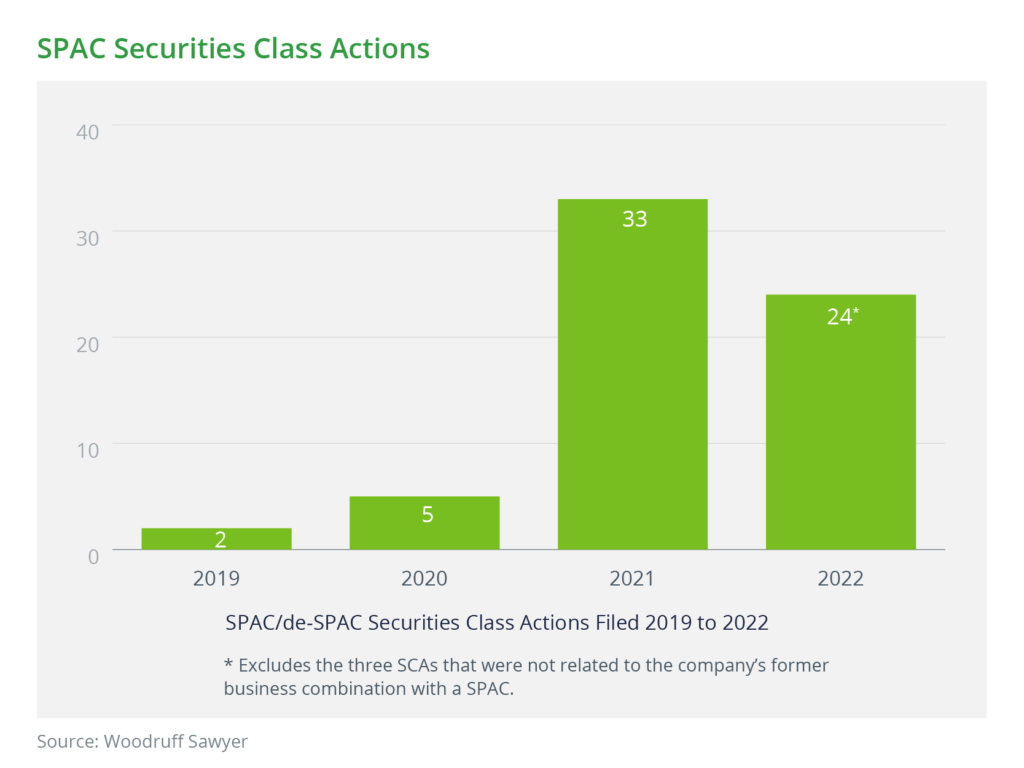 Reasons for Decline in SCAs

What could be causing the decline in the number of SPAC securities class action lawsuits? First is the increased sophistication of SPAC market participants, including SPAC teams and their advisors, over the last two years. This sophistication grew out of both new, more experienced teams and advisors entering the market and out of the increased experience of all those teams and advisors as the SPAC rush of 2020 and 2021 progressed. Many ended up handling more SPAC transactions, both on the IPO and the de-SPAC side, than they ever had before, and, naturally, they learned from previous missteps. This is the so-called self-correction that we referred to in our previous posts and podcasts.

The second reason for decreased litigation volume is the overall decline of the financial market in 2022. Many companies, including those that went public via a traditional IPO and a SPAC, have been experiencing disappointing performance. When the entire market is hurting, it is difficult for a plaintiff’s attorney to claim that one particular team or merger did particularly badly.

The third reason could be the proposed SEC rules regarding SPACs, which came out in March 2022. Even though these rules are still not finalized, many adopted them as a playbook and quickly adjusted their disclosures and transactions to comply.

Taking a look at the number of SCAs and the number of de-SPACs in each year leads to the interesting graph below. Although some SPACs and their targets were sued prior to the completion of the merger, the majority of SPAC-related SCAs occur post-merger. It typically takes a few months—nine months on average—after the merger occurs for a lawsuit to be brought. Understanding the lag between a SPAC merger and a lawsuit, it is interesting to see the decline not only in the absolute number of SCAs from 2021 to 2022 but in the number of SCAs relative to the number of completed mergers in each of those years.

Of course, the SPAC SCA is not the only type of lawsuit that exists. We saw quite a few new types of lawsuits against SPACs in 2021 and a few more novel fact patterns that resulted in disputes in 2022. For example, we saw a few skirmishes around a merger termination fee when the SPAC team decided to keep the fee without sharing it with its investors (e.g., FAST Acquisition Corp., Concord Acquisition, and Pioneer Merger Corp.).

Other types of unusual suits that we had not seen many of in the past include:

There have also been a few derivative (and some direct) actions filed against the D&Os of a SPAC for breaches of fiduciary duties in proceeding with a merger that later turned out to be unsuccessful. The usual themes for a derivative suit, which is typically filed in tandem with an SCA, include rushing into a transaction, failing to conduct proper due diligence, entering into a deal outside of the SPAC’s targeted industry, and the SPAC omitting information relating to potential dilutive effects of the merger.

Likelihood of Getting Sued

One of the questions we often get from clients is focused on the likelihood of their team or venture getting sued. The answer to this question is meant to assist the teams in deciding on the amount or type of the directors’ and officers’ (D&O) insurance they will ultimately purchase. The answer is not simple, but some recent data we collected may be instructive.

As a rough estimate, one can expect about 3% of companies that have been public for 10 years to become subject to an SCA. That number is significantly higher for newly IPO’d and de-SPACed companies. The reason is simple—new public companies are more likely to stumble out of the gate.

An interesting risk question is whether there is a difference in likelihood of a lawsuit for companies going public via a traditional IPO and those choosing the SPAC route. The answer is yes, and the graph below illustrates that difference. 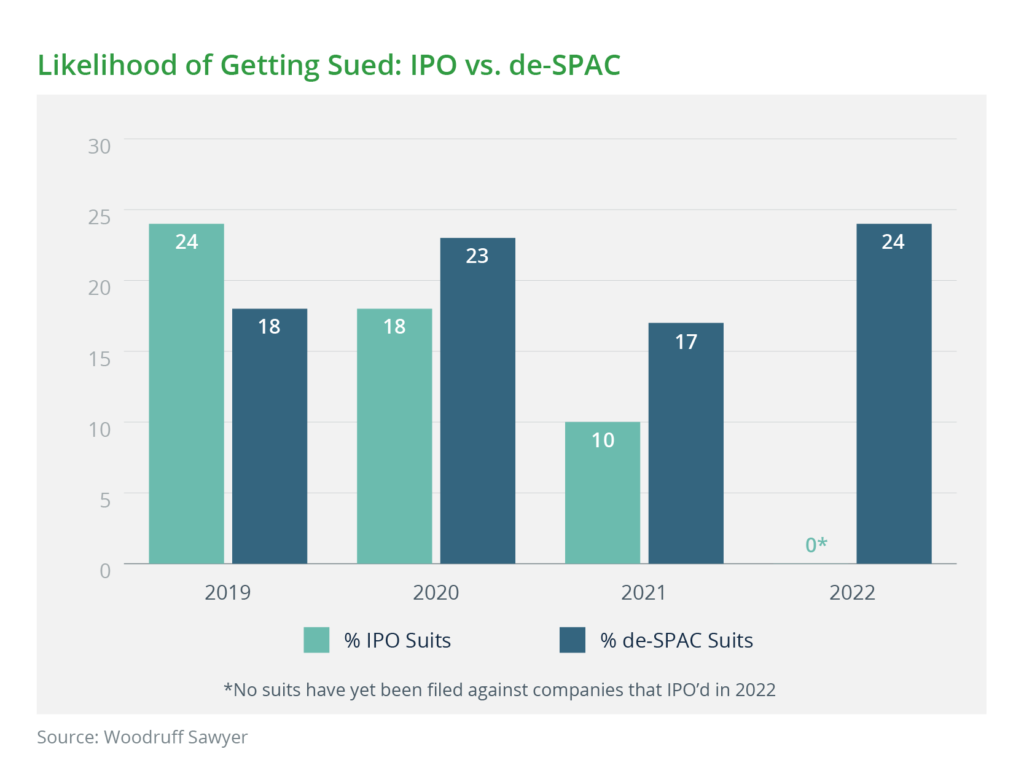 Although there is indeed an increased risk of a lawsuit for companies going public via a SPAC rather than a traditional IPO, that differential in risk is not enormous.

Now let us turn from lawsuits to settlements. There have been very few publicly disclosed settlements, and some of them did not stem from an SCA, so it is very difficult to draw conclusions about trends. The ones that made the news include:

It is worth remembering that outside of the actual settlement amounts, some of which were covered by a D&O insurance policy in the above cases, the defendants had to also pay substantial attorney fees. When deciding on the limit of a D&O policy, it is worth factoring in the potential costs of the attorney fees, which will be due whether or not the lawsuit ends up being frivolous or ultimately gets dismissed.

An interesting way to think about these settlements and enforcement actions is through the lens of the enterprise value of the SPAC business combinations that were completed in the last few years. The total expenditures on private settlements and government enforcement actions run in the millions of dollars and constitute a tiny fraction (likely no more than 0.05%) of the billions of dollars in enterprise value of closed de-SPACs.

Now it is true that SEC typically takes several months—if not longer—to bring and conclude an enforcement action. Considering that the SPAC market went into overdrive in late 2020 and two years have already passed since then, it is interesting that the SEC’s enforcement division has not been able to locate more examples of situations worth pursuing. Could it be that aside from the less than a handful of egregious cases that have been flagged thus far, the rest of the SPAC market teams and deals are operating within regulatorily acceptable parameters?

Update on the D&O Insurance Market

All of the above data is interesting not only in an academic sense. It has real implications for the risk and risk mitigation decisions that SPAC sponsors, their target companies, investors, and deal teams make. Those decisions inevitably involve decisions on the size and structure of each outfit and team’s directors and officers (D&O) insurance. Higher risk yields lower availability of coverage and higher premiums. But aside from the risk itself, the availability and premiums are also dictated by the state of the overall insurance market.

After many months of an almost impossibly hard SPAC D&O market, substantially diminished deal volume both in the SPAC world and the traditional IPO world has caused many carriers to reconsider their stance. In the last few months, we have witnessed a palpable easing of terms and even of pricing. Of course, carriers are keeping a close eye on each new case and enforcement action. However, if litigation and enforcement trends continue to hold at the current level or decline further, we are likely to enjoy a period of reasonable D&O insurance pricing for SPACs in 2023.

Two Hot Button SPAC Issues as We Wrap Up 2022

Over the past year, SPACs have been through market shifts, regulatory thrashing, economic issues, novel…

Plenty has changed since January 2022, when we last examined developing trends in the SPAC market. Since…