“All this automation and effective software is all going to happen, but it is unbelievably difficult” with respect to legal technology, remarked legendary value investor Charlie Munger at the 2020 annual meeting of the Daily Journal Corporation, which he chairs.

Though traditionally a legal publications house, the Daily Journal has, somewhat discretely, evolved into a Legal technology (“LegalTech”) company, with over 70% of revenues generated by the court case management-focused Journal Technologies unit.

Though specific to that business, Charlie Munger’s commentary in many ways captures the zeitgeist for LegalTech more broadly. While in the long run, automation and innovation represent the logical state of affairs for the legal world, that does not imply an easy path – and the ‘long run’ could still be a long ways away.

Legal technology is at an interesting inflection point.  On the one hand, sector maturation appears to be accelerating, as evidenced by rising valuations, capital inflows and even LegalTech-specific SPACs.  Yet, due to a host of sector-specific factors, challenges remain and are likely to persist. “Hardware is hard” is an old investor adage to explain their preference for asset-light software businesses, and while substantively distinct, LegalTech’s innate challenges may be of similar magnitude.

The Daily Journal’s development and Charlie Munger’s insights at its annual meeting provide a unique lens for assessing LegalTech’s challenges, while also highlighting its opportunities. Though, as Munger insightfully cautioned, success is “not going to be easy and it’s not going to be fast.”

The Daily Journal, as Charlie Munger explained, “started as a public notice rag . . . and morphed into a very successful legal daily newspaper” focused on publishing appellate opinions – “an ideal niche. . .  [for a] small but very profitable paper.”

Currently, the Daily Journal publishes 10 newspapers. The largest are the Los Angeles Daily Journal and San Francisco Daily Journal, established in 1888 and 1893, respectively, with 6,300 subscribers between them as of September 30, 2020.  The company’s other major titles include Daily Commerce, The Daily Recorder and the Inter-City Express.  The revenue model is roughly 67% subscriptions and 33% advertising.

Secular shifts have put pressure on this business model and readership has declined. “Technological change is destroying the daily newspapers in America . . . The revenue goes away and the expenses remain and they’re all dying,” Munger explained at the annual meeting.

Along with an enviable portfolio of marketable securities, the Daily Journal has addressed these challenges by developing “a second business . . . to replace the economic strength of the newspaper that is imperiled and that’s Journal Technologies.” Munger described Journal Technologies as “a computer software business that helps courts and government agencies replace human error-prone inefficient procedures with simpler and better procedures run by software.”

Specifically, the unit “provides case management software and related services to courts and other justice agencies,” which “use the Journal Technologies family of products to help manage cases and information electronically, to interface with other critical justice partners and to extend electronic services to the public, including a secure website to pay traffic citations online, and bar members.” The product suite is organized into three core “eSeries” products, of which the best known is eCourt®.

Journal Technologies was developed through a disciplined M&A strategy, followed by extensive ongoing investment and R&D.  The business was built through three primary transactions, as shown in the table below:

Late 2012 and 2013, as it happens, were the optimal time to purchase a LegalTech business. Those years marked the low point in LegalTech investment, but closely preceded a boom in innovation and tech maturation. In other words, a quintessential value investment.

New Dawn, for instance, generated 2013 annualized revenue of about $12.7 million, with a small operating loss, implying a purchase price of around 1.1x forward revenues.  In contrast, some LegalTech companies with comparable revenues have recently been reported to be valued at 50x their top line.

The decade between 2011 and 2020 was a period of vast transition for the Daily Journal. The two critical, interrelated themes were the decline of the traditional business – where revenues shrank 53%, from 31.5 million to $14.7 million – and the ascendancy of Journal Technologies, which saw revenues grow 1082%, from $2.98 million to $35.25 million.

These themes are displayed in the chart below, which shows revenues for the Daily Journal’s two reporting segments: (i) the Traditional Business, composed of the newspaper operations and (ii) Journal Technologies. 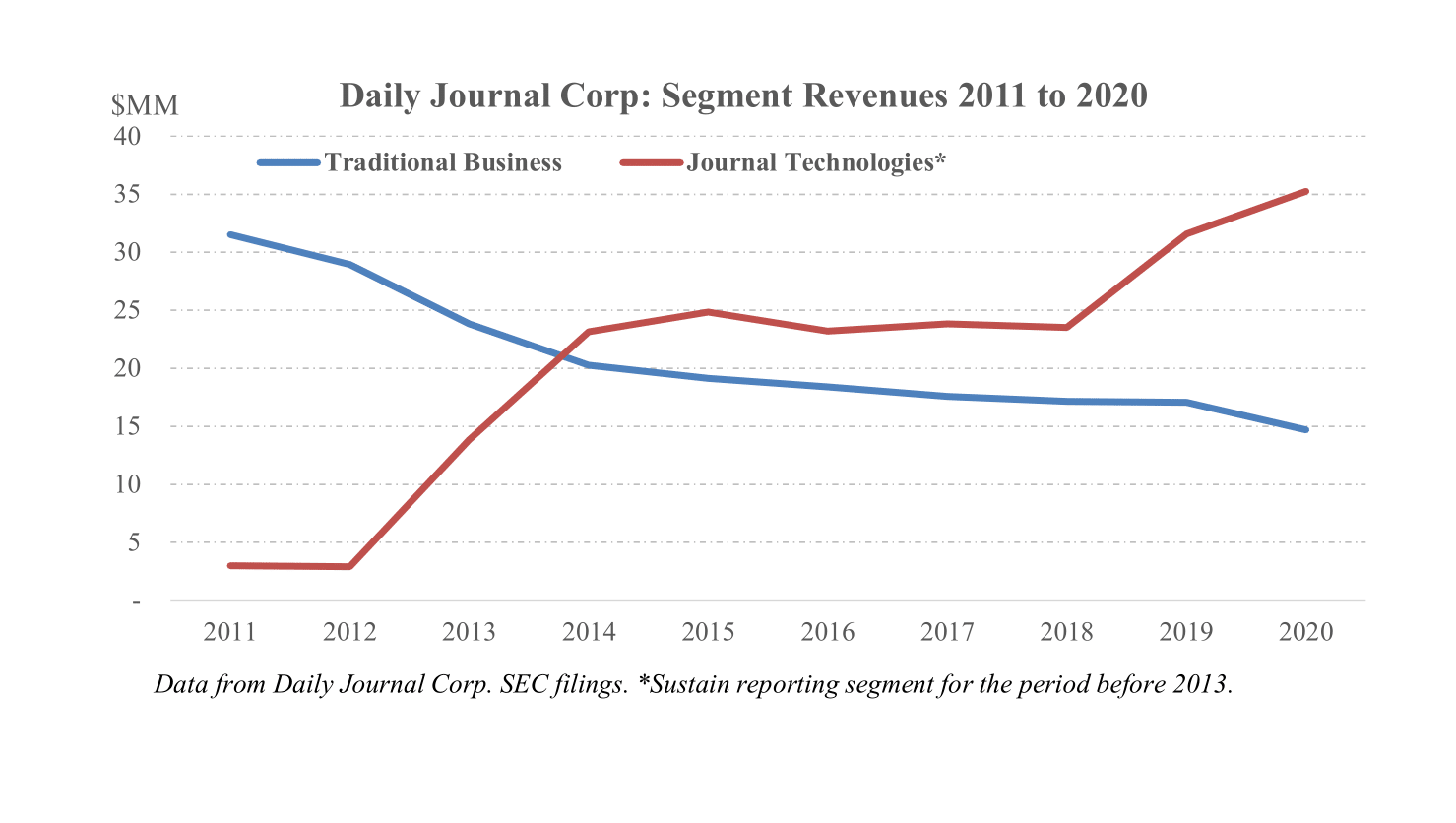 The chart below shows Daily Journal total revenues, as well as the proportion coming from Journal Technologies.  There are two notable takeaways. First, despite the continued deterioration of the traditional business, the company’s total revenues ended the period higher.  Second, as Journal Technologies’ share of revenues grew to 71% by 2020, the Daily Journal evolved into a LegalTech-focused company. 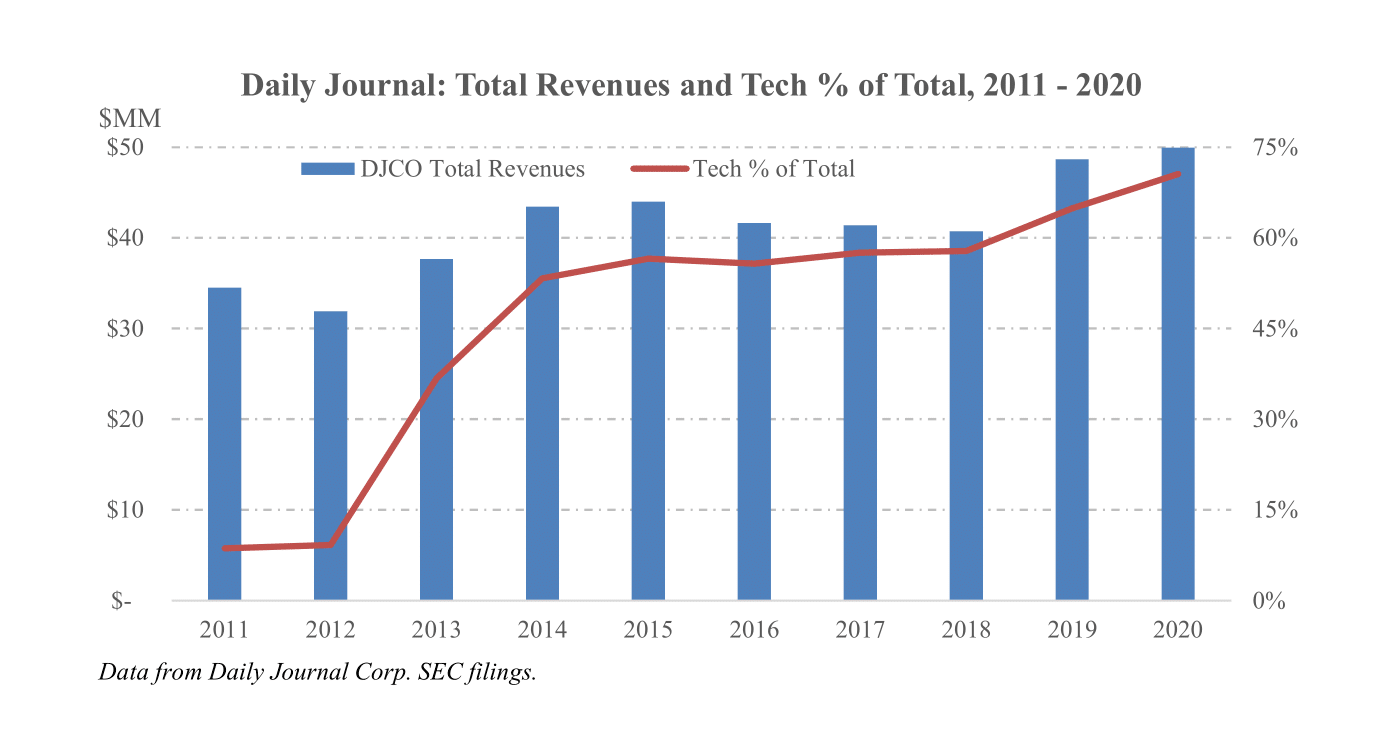 The growth of Journal Technologies was hardly linear or uncomplicated, however. The unit’s top line actually shrank in the four years following the New Dawn and ISD acquisitions, before experiencing strong growth in 2019 and 2020.

An important takeaway is that despite the lower predictability, consulting and public service fees have been crucial top-line drivers, averaging 34% of total revenues and as much as 44% in some years. LegalTech companies often debate whether to offer consulting-like services to supplement a core SaaS offering. A potential lesson from the Daily Journal’s experience is that, despite a revenue profile distinct from SaaS ARR, the approach can have merits, in part because complex products can require a higher touch.

Indeed, for LegalTech companies, the human capital-intensive dimension of the business may also be a function of the underlying technology, which often leverages AI.  As the venture capital firm Andreesen Horowitz observed, “we have noticed in many cases that AI companies simply don’t have the same economic construction as software businesses. At times, they can even look more like traditional services companies.”

The Daily Journal’s successful transition from a newspaper group to a LegalTech platform provides several important insights for players across the LegalTech ecosystem.

Distinctions Between SaaS and LegalTech

Charlie Munger’s remarks at the Daily Journal’s 2020 Annual Meeting hit the nail on the head with respect to some of the distinctions between LegalTech and other SaaS products.

Journal Technologies’ customer base is comprised of governmental units, which “all have special requirements and they’re almost all quite bureaucratic.” While this set of challenges may be more acute for Journal Technologies, highly complex customers and procurement processes are generally inherent to LegalTech.

At the same time, its bespoke and detail-oriented work requires “armies of people.” Further, because the company’s work concerns processes that are integral to the administration of justice, quality matters from both a commercial and normative perspective.  The business has little resemblance to an app; it can’t be plug and play with 80% operating margins – mistakes matter.

As a consequence of these sector-specific complexities, Charlie Munger aptly stated that scaling a LegalTech business is “not going to be easy and it’s not going to be fast.”

This facet is also not unique to the Journal Technologies business.  COVID-era stock market darling, DocuSign, for instance, did not generate significant revenues for nearly its first decade, from 2003 through 2010, though subsequently experienced extremely fast growth, as per its  2018 Form S-1.

Yet, the success of companies like the Daily Journal and DocuSign also illustrates the vast potential of the LegalTech space. Journal Technologies is steadily growing with high revenue quality, a strong customer base and vast green fields at home and abroad.

It is “a big market” and Journal Technologies “may end up with a big share of it,” according to Charlie Munger.

“[W]e can’t guarantee that we will succeed but I consider it likely. I just think it will be slow and awful.”

On February 24, 2022, Russia launched what President Biden aptly termed “a brutal assault on the people…

Learn more at the meeting of the ABA Business Law Section's Legal Analytics Committee in Washington,…