On February 24, 2022, Russia launched what President Biden aptly termed “a brutal assault on the people of Ukraine without provocation [and] without justification.” The conflict has cost thousands of lives—countless civilians among them—and displaced millions, including almost two-thirds of Ukrainian children, according to UNICEF.

Now, the crisis may take on an additional dimension with Russia nearing a historic default on its sovereign debt.

Following the invasion, the United States, its NATO allies, and other nations around the world punished Russia with “unprecedented” sanctions, all but cutting it off from the global economy. One linkage between Russia and the financial system has remained, however: Russia’s sovereign bonds—contractual obligations to make payments to investors, largely based in the U.S. and Europe.

Prices for Russia’s bonds have collapsed, trading below 25 cents on the dollar, down from above 105 at the start of the year. In less than three months, Russia has already been on the brink of default twice, making payments with less than a day to spare earlier in May.

The situation is unique for a host of reasons—not least of which is the fact that Russia has the money. Sanctions, however, have circumscribed its ability to make payments to limited safe harbors, the most crucial of which allows U.S.-based investors to receive interest payments from Russia. That provision expires May 25, and the U.S. Treasury has indicated that it will not be renewed.

With Russia’s next interest payments due May 27, subject to a thirty-day grace period, a default appears increasingly likely. Such a default on foreign debt would be Russia’s first in over a century; in 1998, it defaulted, but only on domestic currency debt.

This article analyzes Russia’s debt structure, including certain key bond provisions; describes the interplay between sanctions and Russia’s payment obligations; and previews potential issues arising from a default—if one comes to pass.

Russia has total sovereign debt of just under $300 billion—a relatively “ low” level, in the IMF’s view, corresponding to about twenty percent of its $1.5 trillion GDP. (U.S. sovereign debt, by comparison, totals about 123.4 percent of GDP.)

Like many sovereigns, Russia has both so-called “local,” domestic-currency denominated debt, and foreign debt, denominated in U.S. Dollars and Euros.

The vast majority of Russia’s debt, totalling about $250 billion, is Rouble-denominated. In addition, as detailed in the table below, Russia has about $37.3 billion of foreign debt, with $31.7 billion denominated in dollars and 5.25 billion in Euros. The USD debt was issued across ten different series, maturing between 2023 and 2047; the Euro debt is in four series, maturing between 2025 and 2036. 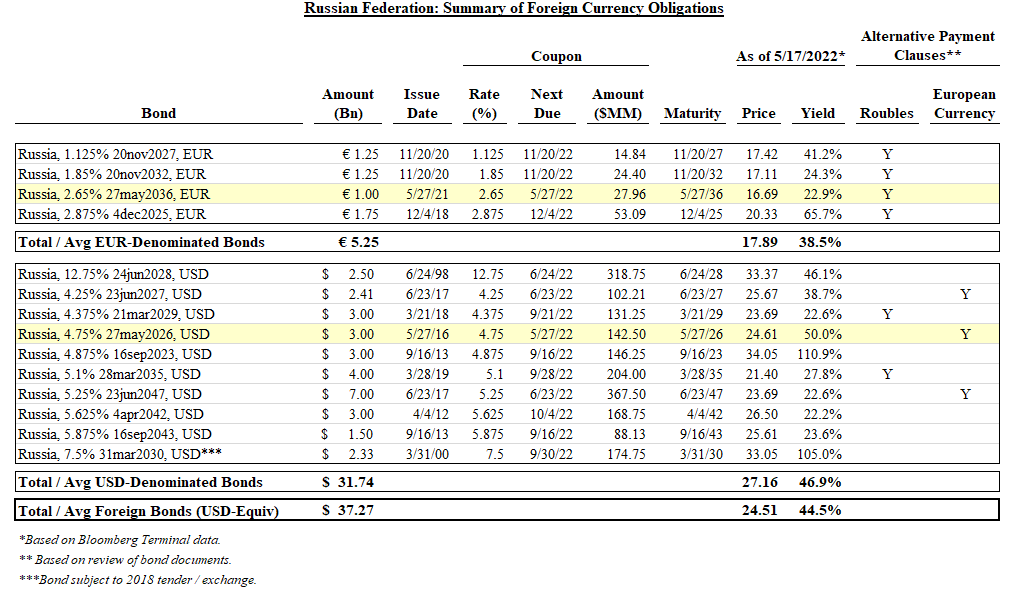 Russia has about $37.3 billion of foreign debt, with $31.7 billion denominated in dollars and 5.25 billion in Euros. Source: Bloomberg data, CBonds data, and review of underlying bond documents.

Before February’s invasion—and notwithstanding sanctions after its 2014 annexation of Crimea—Russia was considered a reasonably safe credit, with a “still-strong balance sheet and increasingly robust external position.” This in large part reflected Russia’s $600 billion of foreign reserves, in theory more than sufficient to repay all of the nation’s debts.

Then, in one day, everything changed.

The chart below, based on Bloomberg data, shows the impact of Russia’s February 24 invasion (denoted by the red oval) on prices of sovereign bonds issued by Russia (in white), Belarus (blue), and Ukraine (gold). All three sets collapsed following Russia’s invasion.

Bonds issued by Belarus, Russia’s close ally, have been hardest hit, falling from near-par in January to 14.53 cents on the dollar by mid-May. Ukraine’s bonds fell below thirty cents on the dollar in early March, but subsequently recovered to the mid-40s by May. Russia’s obligations—many of which traded above par pre-invasion, reflecting relatively generous coupons—collapsed towards the thirties by mid-May and fell further this week. 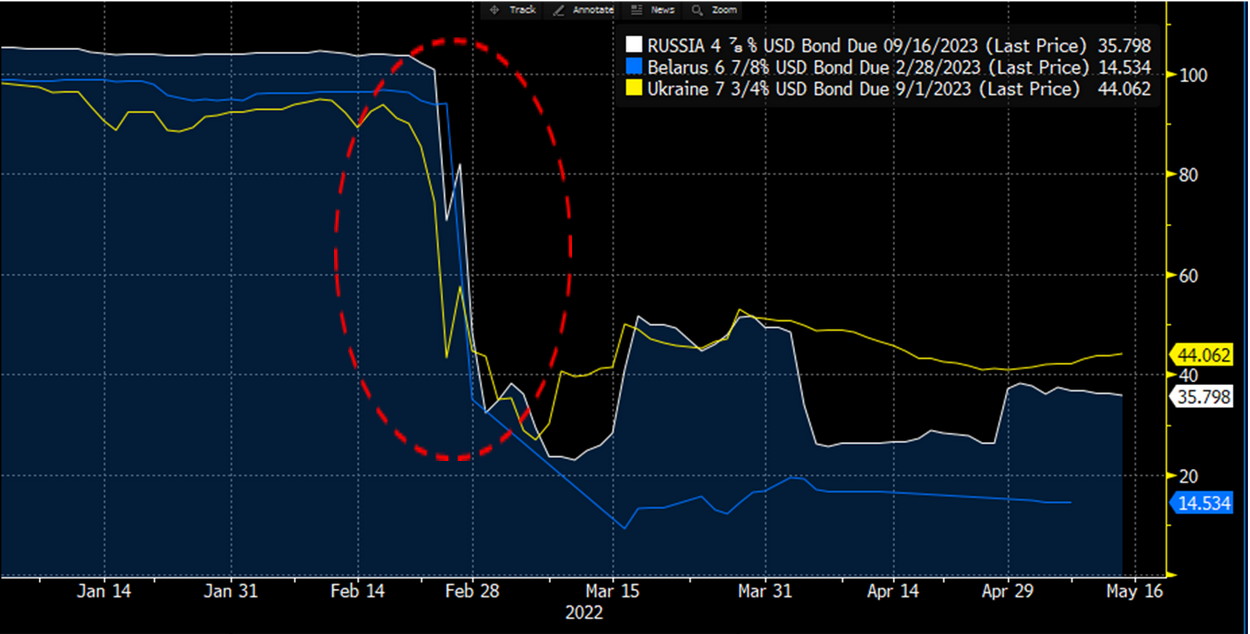 Sovereign bonds issued by Russia, Belarus, and Ukraine all collapsed following Russia’s invasion (denoted by the red oval). Chart based on Bloomberg data.

According to IMF estimates, about three-fourths of Russia’s debt is held by domestic investors, still leaving nearly $75 billion in the hands of foreign financial institutions.

Based on Bloomberg data, the single largest holder of Russian debt is Allianz, the German insurer and asset manager, with nearly $3.2 billion across rouble, Euro, and USD-denominated bonds. The next four largest are U.S.-based investment complexes: Capital Group, with $1.31 billion, Vanguard ($868 million), Legg Mason ($837 million), and Western Asset Management ($807 million).

Dozens of prominent European, Canadian, and Japanese investment groups—including, somewhat paradoxically, many ESG-focused vehicles—have respective exposures in the hundreds of millions. Because of this, a potential Russian default will impact investors around the world.

“These are the worst-written contracts I have ever seen on the international markets,” observed a preeminent sovereign debt scholar. Indeed, the “booby-trapped” agreements include materially off-market provisions, appearing to, all things being equal, confer significant advantages to the issuer. For instance, “the bonds lack a waiver of sovereign immunity and, while they are nominally governed by U.K. law, they don’t appear to submit to a jurisdiction,” making enforcement much more difficult.

For our purposes, the contracts’ most distinctive provisions concern the relevant payment currency. Typically, this dimension of sovereign bonds is not much of a moving target, with the applicable currency clearly specified. Indeed, while intensive sovereign debt–related conflicts are not uncommon, the fracas usually center on other provisions, such as Argentina’s now-infamous pari passu clause.

Russia’s bonds, however, contain a relatively unique “Alternative Payment Currency Event” provision. The language purports to allow Russia to make payments in a currency different than the one specified in the event of “reasons beyond its control.”

In this respect, Russia’s outstanding obligations can be separated into three sets: (i) bonds predating the 2014 Crimea invasion, without any “Alternative Currency” provision; (ii) post-2014 bonds allowing for USD payments to be made in European currencies; and (iii) post-2018 bonds, contemplating payments in roubles.

[I]f, for reasons beyond its control, the Russian Federation is unable to make payments of principal or interest (in whole or in part) in respect of the Bonds in U.S. dollars (an “Alternative Payment Currency Event”), the Russian Federation shall make such payments (in whole or in part) in Euros, Pound sterling or Swiss francs (the “Alternative Payment Currency”) (emphasis added)

The post-2018 vintages go a step further, providing that:

One impact of these provisions is that bonds with the Rouble fallback were determined ineligible as “deliverable obligations” by the Credit Derivatives Determinations Committee.

It is difficult to parse the evolution of this language without inferring a degree of premeditation in respect of anticipated future sanctions—why else would one include such oddly specific provisions?

Following Russia’s invasion of Ukraine, the U.S. led a plurality of the world’s advanced economies in enacting a sanctions regime against Russia “unprecedented to a scale and scope that we haven’t seen since the Cold War.”

The restrictions span everything from terms of trade to asset ownership and participation in cultural events, such as the Eurovision competition, which Ukraine won. Along with the Russian state, the sanctions also target related entities, leading to financial stress at a range of companies, such as steelmaker Severstal.

Prior to the invasion of Ukraine, Russia stockpiled vast reserves totalling $630 billion, with nearly $500 billion in foreign currencies and the balance in gold. Indeed, in late January, before the invasion, The Economist observed that Russia’s cash pile was “more than enough to weather sanctions.”

However, in a strategy “beyond comparison to previous sanctions regimes, particularly involving a major power like Russia,” the U.S. and its allies deployed sanctions targeting Russia’s central bank and its assets worldwide, precluding Russia from utilizing as much as half of its total reserves.

The sanctions regime is largely made operable through directives to financial intermediaries, in this case essentially prohibiting them from transacting on behalf of the Russian central bank.

The interplay between the sanctions regime and Russia’s bond payment obligations has raised unique legal and commercial considerations.

Following its invasion of Ukraine, Russia had two sets of payments due on its foreign bonds—both of which were ultimately paid following down-to-the-wire acrobatics.

The first set of payments was due on March 16. Russia was able to make the payment using its now-frozen foreign reserves.

The second payment, due April 4 for a total of about $2 billion in principal and interest, came far closer to default, following the U.S. Treasury’s decision to block Russia from using its foreign reserves to make the payment. Russia initially tried to pay in roubles; however, this was deemed impermissible. At the very end of the bonds’ thirty-day grace period, Russia made the payment in dollars, avoiding a formal default by the narrowest of margins.

Thus far, investors have been legally permitted to receive payments on Russia’s bonds because of a carve-out to the sanctions regime. According to the U.S. Treasury FAQ regarding Russian debt transactions:

On Tuesday, May 17, the U.S. Treasury indicated that this safe harbor would not be extended. “After May 25, 2022, U.S. persons would require a specific license to continue to receive such payments” in respect of Russian bonds. Treasury Secretary Yellen stated that “[w]e’re actively involved in an evaluation of the risks and impact of not renewing the license.”

This is particularly significant because Russia has two payments due on May 27. Though the contracts include a customary interest payment grace period, it is not clear how Russia would be able to deliver the payments.

The chart below, from the Bloomberg Terminal, shows Russia’s sovereign CDS curve as of May 19 (green) and a week prior (yellow). Two observations are particularly notable. First, the term structure is highly inverted, with near-term credit default swaps much more expensive than longer-dated protection, suggesting market perception of a near-term risk. Second, the change between the two lines illustrates the impact of the waiver expiration, with the market now pricing in a much higher likelihood of a Russian default.

Russia’s sovereign CDS curve as of May 19 (green) and a week prior (yellow). The change between the two lines illustrates the impact of the expiration of the safe harbor permitting U.S. investors to receive payments on Russia’s bonds. Chart from the Bloomberg Terminal.

What happens next? If Russia indeed defaults on its debts, a fight with its creditors appears almost certain. However, the outcome would be far from clear, in no small part due to the bonds’ distinctive provisions—as well as the unique dispositions of the debtor.

An additional, potentially underappreciated conflict may also loom. Many commentators have suggested using Russia’s frozen reserves to help rebuild Ukraine—which the Kremlin has decried as “theft.” Yet, those assets would, at least ostensibly, also represent a viable source of payment for bondholders, creating the risk of a zero-sum outcome with potentially profound normative and policy implications.

The Daily Journal’s ‘Slow and Awful’ Path to LegalTech Success

The ABA Business Law Section's Legal Analytics Committee will meet on Friday, April 23 from 10:00 am…

Learn more at the meeting of the ABA Business Law Section's Legal Analytics Committee in Washington,…